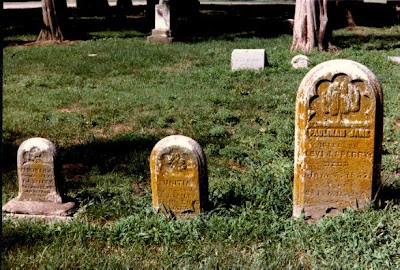 Paulina Jane was the oldest daughter and second child of James Alexander Dobbins and his wife, Elizabeth Perkins Dobbins. She was born in Clermont County, Ohio on November 8, 1829. Following her birth were those of Elizabeth Caroline Dobbins in 1831 and James Dobbins Jr. in 1836.

Paulina's father was the oldest son of Rev. Robert B. Dobbins, a Presbyterian minister who rode circuit in Ohio, Indiana and Illinois. Because Rev. Dobbins was gone so much, Jim became the primary manager along with his mother of the Dobbins farm property. While ministering in Illinois, Robert B. bought some property near Ipava, and in 1835 the entire family moved there. It was here that Paulina grew up and where, in 1850, she married Levi S. Sperry.

In Illinois Levi and Paulina were to have two daughters. The first, Emma, was born in January of 1852, but she died eight months later and was buried in the Dobbins Cemetery. Daughter Unicia (sometimes spelled Eunice) was born on July 7, 1854.

There are not many records left from the early Lawrence area, but in driving through Oak Hill Cemetery I found a simple record of what happened to the Sperrys.

The death of his wife left Levi with little three-year-old Unitia. Luckily there is an extant Lawrence newpaper that announces the marriage on August 13, 1857 to Nancy Jane Anderson, the daughter of a neighbor. But it is sad to see a third tombstone in the same row in the cemetery that is Unitia's, giving the date of her death as March 26, 1865. She was 11 years old.

That was the end of Levi's relationship with the Dobbins family. Except that a few years later, in 1867, after Paulina's brother Jim Dobbins returned from the Civil War, Jim boarded at Levi and Nancy's farm, and it was there that he met the widow Nancy Corel LaHay, who upon marriage to him would become my great-grandmother.