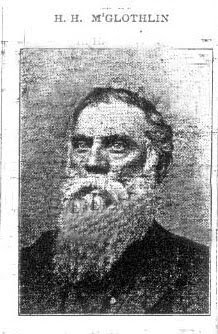 I've always liked old Henry H. McGlothlin. His mom, Jemima Corel McGlothlin was my great-grandma Nancy Corel (Widow LaHay) Dobbins's oldest sister. I didn't know anything about him until 1984 when I started genealogy. There were no family records left on him, and no family stories. But I can tell you lots!

He was born in Tazewell County, Virginia to Jemima and David McGlothlin. He was their third child, and first of three sons. Almost the entire Corel family moved from Virginia to the Westport area of Kansas City before 1850. Henry's mother died in 1851, and Dad moved the family back east to Kentucky. When Kansas Territory opened up for settlement, the Corel families moved into Douglas County. In 1856, who should show up on the doorstep of the matriarch, Rebecca Corel, but her grandson Henry, now 16 years old.

If you remember your history, this was the Bleeding Kansas period. The South wanted Kansas to come into the Union as a slave state; the North wanted it to be a free state. There were border ruffians on both sides, and both Quantrill and John Brown came through that border area with their own brands of enforcement.

In the 1910 book "Quantrill and the Border Wars," written by William Connelly he states

Since three of the Corel children married McGees, and since both Corels and McGees took land east of Lawrence on the river, it is highly likely that Connelly is also talking about the subject of this blog, Henry H. McGlothlin." It is also likely that the whole Corel family were southern sympathizers, coming from Virginia. However, what happened in this family, and in others that I read of, by the time the Civil War came around, they supported the Union. My great grandmother married a Missouri Border ruffian in 1856 and after being widowed, she married a former Union soldier.

At any rate, Henry McGlothlin enlisted in the 7th Kansas Cavalry at the outbreak of the civil war and served to the end, being located part of the time at Ft. Scott. His appearance at enlistment as recorded in his pension file says that he was 5'-11", had a dark complexion, blue eyes, black hair, and that he was a carpenter.

In his later life his pension application tells of the rigors he faced while in the Civil War:

"...at the time I made application for Pension...I was then, and had been for many years, suffering with "Piles" and "diseased rectum" (which I forgot to include in my application.) The incurrence of "Piles" and "Diseased Rectum" was, as I verily believe, caused by riding horseback in the service and from exposure incident to Army life, and said "Piles" and "disease of Rectum" first made their appearance in a slight degree while I was yet in the Army and have gradually grown worse from year to year since, so that it is very difficult for me to state just where and when said diseases were contracted or the circumstances under which they were incurred, as they are of many years standing."

His obituary adds a bit to our knowledge of his life: he boarded a steamboat on the Ohio River, coming to Kansas City in 1856 by way of Louisville and St. Louis. He has been a resident of Kansas since that time. He married Mrs. Rebecca Probasco in the year 1871 but they had no children. He was deputy sheriff of Linn County for over 20 years and for four years was deputy U. S. Marshal. He "cried" public sales continuously for over 30 years and is the best auctioneer in the state. He had a sunny disposition and a kind heart. He was referred to as Col. Henry H. McGlothlin.

In 1887 he was appointed guardian for his brother Shadrick's daughters, Cora (age 16) and Julia (age 11), upon the death of their mother.

He and his second wife, Ella R. Haskins are buried in the Pleasanton Cemetery.
Posted by Bobby Dobbins Title at 1:29 PM